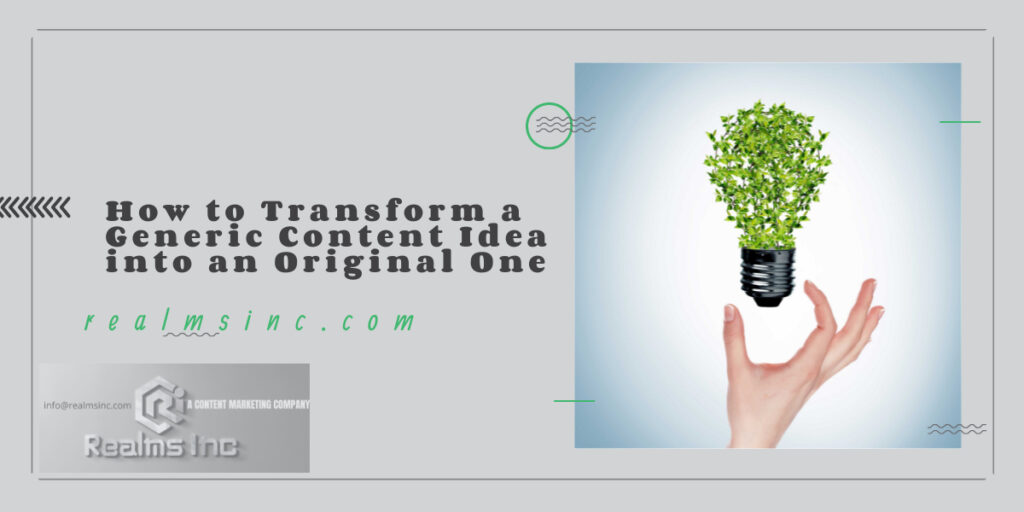 In today’s content-heavy online environment, it might be challenging to come up with new content ideas. But given how many marketers are vying for the same audience within the same subject while using the same data or facts, this is not at all surprising.

If your company offers auto parts, you might regularly write articles about vehicle upkeep. But how many different or creative approaches to the list of 10 things to periodically check on your car are there really?

There aren’t many differences between them, besides possibly deciding on a different number of things to check. Without reading the articles, you can probably guess the majority of these items, including tyre pressure, oil, water, spark plugs, etc.

Why would someone continue reading these articles after the initial click? What additional benefit does it provide to read “check your tyre pressure” in numerous variations?

A checklist might make sense inside the car parts business as a component of its content collection. Beyond its website, the material, equipped with the same keywords and information as so many others, is engaged in a losing battle to rank and draw readers.

This isn’t content marketing; this is SEO to the kill, where each page’s Core Web Vitals are more likely to determine the winning edge than the oh-so-similar content.

The lack of creativity

Here’s why I believe it continues to occur.

A company’s marketing department has identified a number of topics linked to doohickeys and the issues they address. For each persona, every content concept imaginable is scattered throughout the whole consumer journey, from awareness through purchase and beyond.

They chose this week’s theme to be the typical issues people have with doodads, since recognizing a doodad’s limits is frequently the first step in deciding whether to upgrade to a fully fledged doohickey. The group looks through the keyword list, notes the first few concepts that occur to them, and then begins drafting the briefs.

The content ideas are, however, entirely unexplored at this point.

Anyway, the writer is given a title and a list of keywords as instructions, so they create a simple structure and crank out 800 words. It’s time to instruct the marketing assistant to hunt up stock photos of lovely women smiling or meditating while seated in the most awkward or uncomfortable positions.

And in this way, the world is introduced to yet another blog post with the heading “5 Things to Think About Before You Buy a Doodad.”

The brief’s requirements are met, all the material is true, and the writing is flawless. Simply said, it’s derivative.

The procedure has produced content that is fundamentally similar to and predictable from every other company attempting to advertise the same products to the same audience, including the marketer, the short, and eventually the writer. include their adversaries.

Naturally, not all marketers adhere to this procedure. I have no doubt that everyone reading this is incredibly creative. A collective hug

But I’m also confident that I’m not the only one who has encountered a number of these production processes that, for a variety of reasons, unwittingly turn material into a commodity with little to no potential for creative development.

The unrelenting week-in, week-out content schedule simply cannot be suspended while creative types sit in front of windows or go for lengthy walks in the hopes that inspiration will eventually strike.

It turns out that’s not at all how inspiration functions.

The myth of creativity

Many of you are familiar with the tale of Archimedes, which involves a splash, a naked rush, and the cry of “Eureka!”

The word Heureka, which is Greek for “I have it,” is the exact phrase Archimedes would have yelled.

Even more pedantically, Archimedes’ bath was probably a hip bath that he would have stood in while a slave poured water over him, demonstrating once more that the best ideas usually occur in the shower. To be totally truthful, the entire incident probably never happened. Hey, I’m trying to make a point here.

Whether or not it is accurate, the tale of Archimedes in the bath has contributed significantly to the myth surrounding creativity by supporting the idea that inspiration can come from nowhere. You have a brilliant idea that comes to you out of the blue. Eureka!

However, Archimedes’ brilliant thought was the result of a chain of events and a considerable amount of mental effort rather than being a sudden or random insight. The story goes that Archimedes was preoccupied with finding a way to determine the volume of the king’s elaborate new gold crown without melting it. If you’re intrigued, you can use your own Google abilities to learn the reasons behind furious rulers and golden crowns.

The point is that Archimedes was frantically looking for a way to gauge the volume of intricate objects. Long before entering his fictitious bath, he had been considering theories. Otherwise, like he did every other time he had taken a bath, he would have likely completely missed the significance of the water spilling out of the tub.

The life of Archimedes demonstrates that creativity is a method of thinking that we can all cultivate, rather than a supernatural flash of inspiration. The process of thought collisions, the meeting of the familiar and the unfamiliar, the discovery of connections between seemingly unrelated things, and—most importantly—active searching for those connections are what give rise to creativity.

And it implies that any of us can exercise greater creativity while attempting to generate unique concepts for our material.

One notion that we’ve undoubtedly seen before is that of a haunted hotel. Another unoriginal concept is a young child with superhuman abilities. These two concepts together result in The Shining.

His words of wisdom don’t just hold true for best-selling horror books. Even when a piece of material may be treading similar ground, it can nevertheless be fresh and innovative because of the collision of two concepts.

Adding a second concept might give your writing a unique or memorable topic or perhaps a key metaphor that sparks a lot more original strategy. Or it might approach the subject from an unexpected angle, putting the data in a new light or prompting the audience to evaluate and think about the same data in a different way.

Do you need to see this in action?

The exercises in my previous content marketing seminars would lead participants through the development of personas, the choice of subjects and themes, and the mapping of customer journeys. A few content ideas would then be extrapolated from there.

The finest ideas in the room at this point weren’t likely to be all that different from those offered by any competitors who were aiming to attract the same personas with the same content on a comparable product’s journey. The subsequent task was to generate a second idea to supplement the original by adding a different angle or viewpoint.

One of the pitches that came out of this exercise that I particularly liked was from a marketer for an agency who works for a veterinary drug company that specialises in animal immunizations.

The subject was preventative care for horses, and the original plan was to provide owners with a checklist to use, which, I hope you’ll agree, isn’t too unlike the 10 Things to Check on Your Car list.

He opted to deliver the information from the perspective of the horse after further developing the concept. An online journal was used in place of the checklist so the horse could share its perspective The information would assist owners in understanding how various medical issues affect a horse in ways other than their outward symptoms. Additionally, it would show how the conditions arise even before an owner may notice them.

Each article would concentrate on a distinct sign or facet of the horse’s medical experiences, providing more in-depth or precise answers to any issues a horse owner could have. Additionally, each of them would increase the potential for long-tail keywords, thus resulting in SEO benefits as well.

The genius of this concept was that it put the horse—not the illness—at the centre of the narrative. It would promote better empathy and understanding between owners and their horses by portraying the strangely literate being as a living, thinking being that is capable of experiencing pain and anguish, anxiety, and bewilderment just like humans would.

The workshop participant was clearly animated. Yes, more thought was required to translate the concept into a workable proposal, in addition to client pitches, budget negotiations, and other factors. However, the creative process had already begun.

Never give up on an idea.

The key is to realise that everyone else probably had the same initial thought as you. It rapidly comes to mind because it is familiar, which is exactly how a cliché functions.

A good creative process takes this into account. What can I contribute to this first concept? That is what a healthy creative process asks. The formalisation of the search for a second idea in order to develop a fresh perspective on the first step of the creative process.

That’s why both of these concepts have room in my own briefing templates:

Sometimes the solution is as straightforward as fusing two already-existing yet evident concepts.

At other times, creative problem-solving may be needed to uncover less evident links between disparate subjects.

When I’m at a loss for ideas, I search these books for relevant terms. An amusing theme might be suggested by a Douglas Adams quotation, and I might find a humorous method to explain a cutting-edge technological advancement in an ancient tale.

You see what I mean?